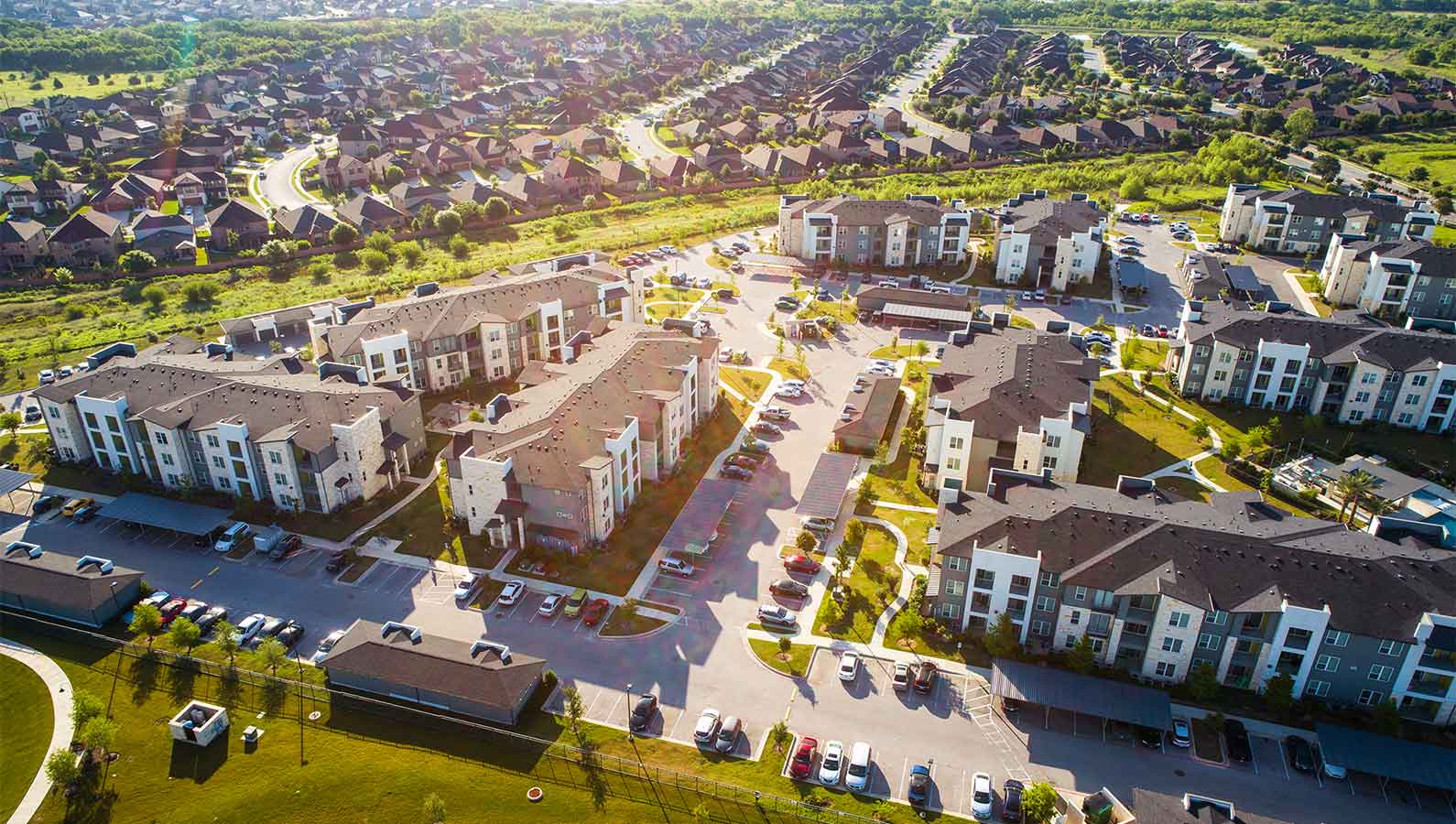 How Would a Recession Affect Multifamily Investing?

We are, no doubt, living in interesting times. In March 2020, the 11-year bull market came to an end. Economies across the globe were shocked as a pandemic spread across the world. The voluntary actions taken to slow the spread of COVID-19 will likely cause a recession.

We just don’t know how long or how deep yet. The impacts are highly asymmetric. Hospitality and restaurants have been hit very hard. Yet food delivery and logistics are booming. While all of this unfolds, millions of Americans are left wondering about the stability of their investment portfolios. Specifically, you likely want to understand what happens to commercial real estate during a recession.

Long story short, multifamily apartments are one of the best investments you can make during a recession. Apartments have a long history of being a recession-resistant asset class that thrives in both good times and bad. For other commercial real estate during a recession, it’s a mixed bag. Let’s dive into that data.

Over the last 40 years, there have been five different recessions:

Multifamily Apartments vs. Other Commercial Real Estate During a Recession

It’s important to remember that, at its core, an investment in multifamily real estate is an investment in the basic need for shelter. As such, it joins food staples as one of the last two expenses people forego during times of severe economic stress.

Faced with the threat of homelessness, individuals will surrender entertainment, luxuries, restaurants, travel, and so much more to keep a roof over their head. So, it’s not surprising that during past recessions, multifamily has outperformed other commercial real estate types.

CBRE Economic Advisors evaluated the performance of apartments against office, industrial, and retail during the 2001 recession and the Great Recession of 2008 and 2009.

The following data were presented in a white paper by the National Multi Housing Council entitled Explaining the Puzzle of High Apartment Returns and demonstrates the long-term stability of apartment investing.

The key takeaway is this: over any period greater than one year, multifamily has provided better risk–adjusted returns than any other real estate asset class. 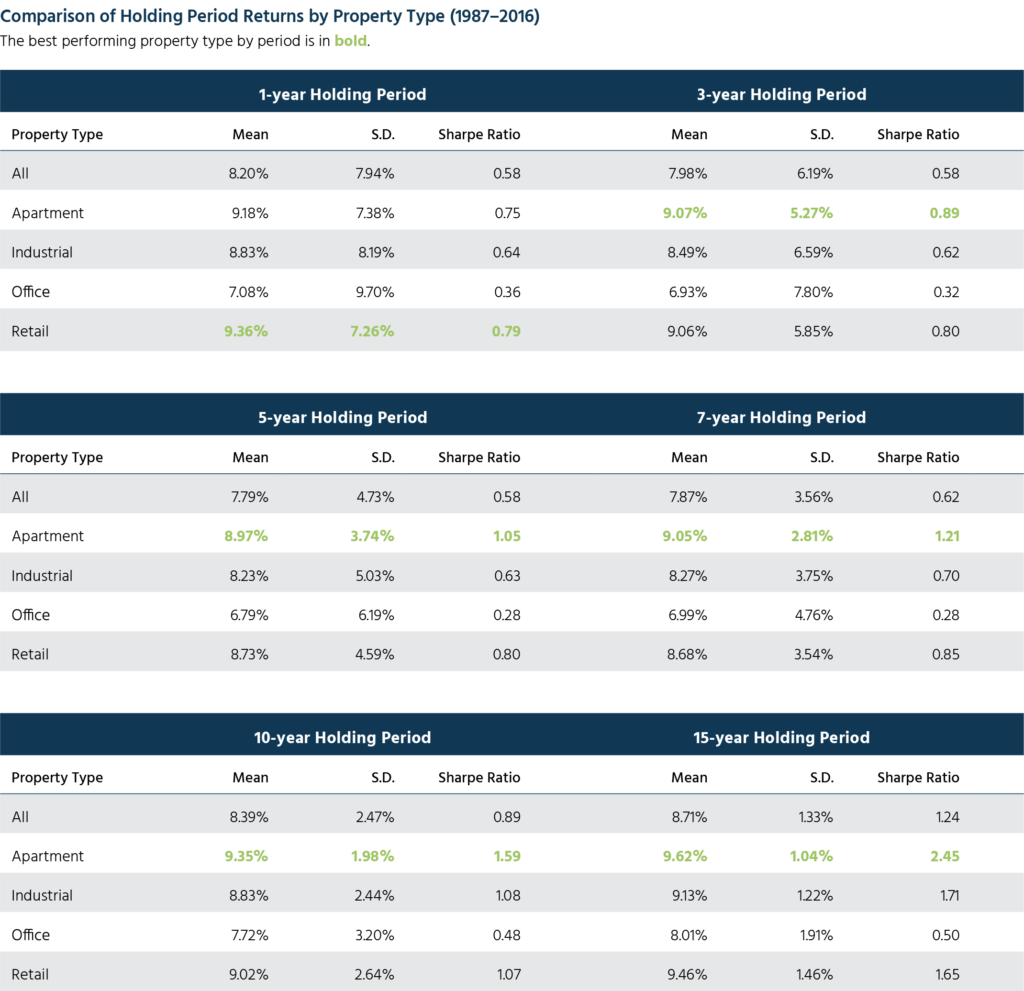 The National Council of Real Estate Investment Fiduciaries (NCREIF) tracks the performance of commercial real estate. They report the results on a quarterly basis as the NCREIF Property Index (NPI).

NPI is an unleveraged composite total return for private commercial real estate properties held for investment purposes only. Its large pool of properties consists of operating apartment, hotel, industrial, office, and retail. Another way to evaluate the performance of apartments against the other commercial real estate classes is to look at components of NPI. The NCREIF Property Index (NPI) was created in 1978.

The chart below summarizes the performance of NPI and its individual property components from 1978 through 1997. This timeline overlaps three recessions (1980, 1981-1982, and 1990-1991). Similar to the prior data, multifamily apartments had the highest returns, the least risk (Sharpe Ratio), and lower volatility, as evidenced by its standard deviation.

Source: Twenty Years of the NCREIF Property Index. Available at: https://ssrn.com/abstract=124325 (a) Geometric means based on observed annual returns. (b) Sample standard deviation of annual returns. (c) The 30-day treasury bill total return was used as a proxy for the risk-free rate. The average risk-free rate for the period 1978 through 1997 was 7.28%. The average for the period 1983 through 1997 was 6.14%. (d) The NPI regional mall series began in the second quarter of 1981. In order to make a comparison to the other property types, this study will use the first quarter of 1983 as the inception date for the regional mall series.

Multifamily is the King of Commercial Real Estate Investments

The data is clear: over the last five recessions spanning more than 40 years, apartments have outperformed other real estate property types. With that said, not all apartments are the same. NPI incorporates three types of apartment buildings: high rise apartments, low-rise, and garden-style apartments.

This is particularly important to our investors as 37th Parallel Properties primarily invests in garden-style apartments. The research shows that of the three apartment types, garden-style performs the best. 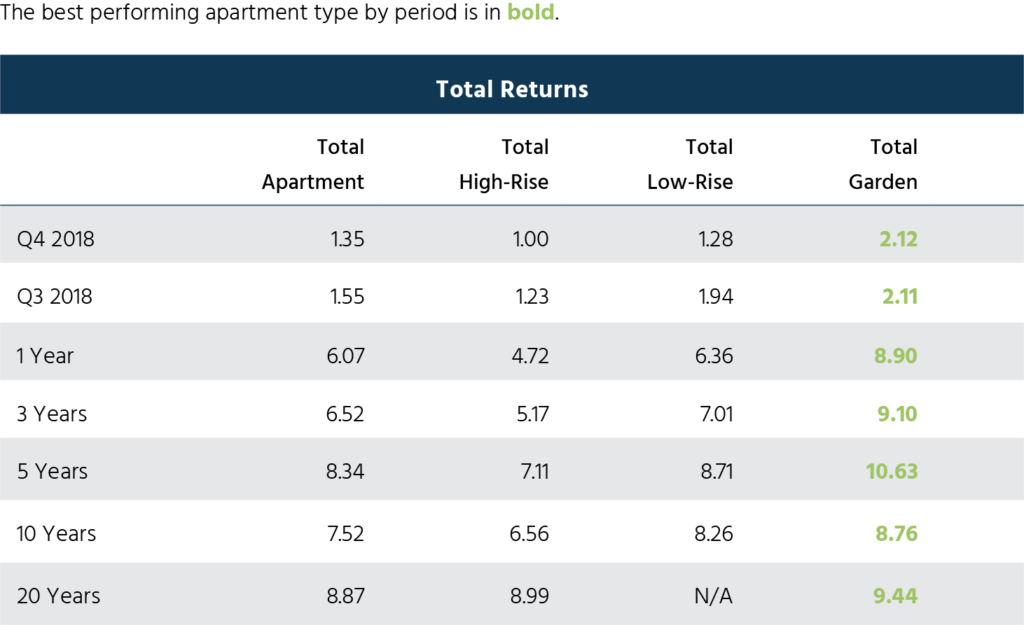 There’s little doubt that multifamily will continue to reign during and after this pandemic. Just consider some of the headlines in today’s media that recognize the stability of multifamily. In other words, multifamily is well-positioned to weather this economic storm.

History has a way of repeating itself and it is the safety and security factors inherent in this asset class that attracts so much conservative, risk-averse capital.

“Multifamily looks to be the strongest market and will likely perform better than it did during the Great Recession, though student and senior housing are exceptions.”   – Business Insider  March 25, 2020

“Multifamily… is more protected against downturns than any other asset class, making it a safe investment as the cycle matures.”   – GlobeSt.  December 31, 2019

The Stock Market vs. Commercial Real Estate During a Recession

Over the last 20 years, core commercial real estate, in general, and multifamily apartments, in particular, have outperformed the stock market. Multifamily has had better returns and a lower risk profile (superior Sharpe Ratio) than the S&P 500, for example. As demonstrated in the chart to the right, NPI outperformed the S&P 500 over the last 20 years. And its performance has been far more stable without the volatility that comes with the stock market. 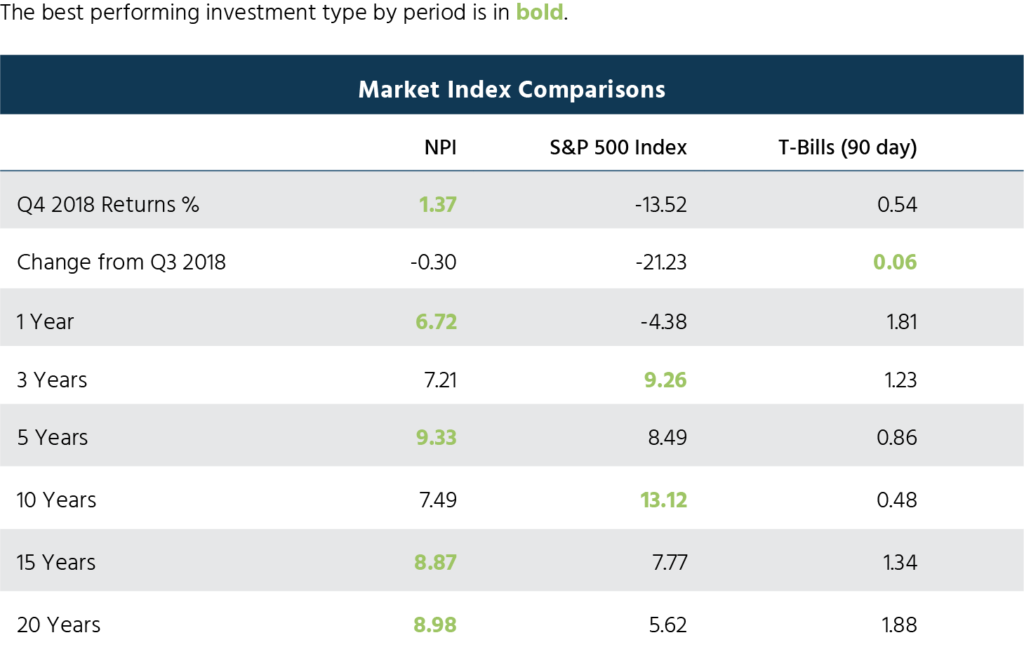 As you can see from the graph below, adding real estate to a portfolio improved its performance regardless of whether that real estate was purchased by selling off one’s positions in stocks (equities), bonds, or a 50/50-split of both. Higher returns with less risk (enhanced Sharpe Ratio) were common results when adding real estate. DALBAR produces an annual report titled The Quantitative Analysis of Investor Behavior (QAIB). They’ve found that the high liquidity of the stock market, coupled with poor investment decisions, taxes and fees is at the root of this underperformance.

Over the last 30 years, DALBAR discovered that the average investor underperformed the S&P 500 by 5.88% per year. The 20-year gap is closer to 4.0%. Some people believe that DALBAR’s research methodology overestimates the gap between market returns and investor performance. However, nobody disagrees that the gap is real and due to behaviors like attempts at market timing, overbuying at market highs, and selling at market lows.

Two things are clear. First, if you’re going to invest in stocks, accumulate index funds, don’t attempt market timing, and hold them in tax-deferred accounts. Second, if you haven’t diversified into apartments, over the last 20 years, then your portfolio is likely lagging behind. 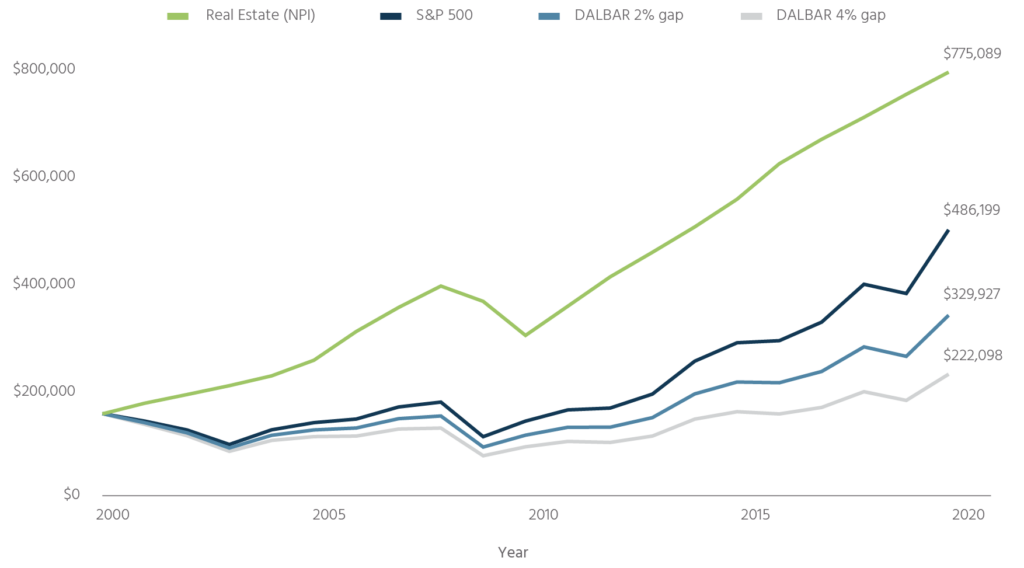 For decades, people have invested in apartments for tax-advantaged passive income, equity growth, diversification, and stability.

The Stability of Multifamily Investing During a Recession

Economic hardship and recessionary times come and go, but they can inflict long-lasting damage to investment portfolios and cause overwhelming emotional stress to affected investors. However, for those armed with information, real long-term investment opportunities are there. For decades, people have invested in apartments for tax-advantaged passive income, equity growth, diversification, and stability.

Of course, no investment is completely recession-proof, but multifamily apartments are recession-resistant. Historically, an investment in basic needs (like shelter) has weathered the economic storms better than other investment types, especially garden-style apartment investments.

Multifamily – An Investment in the Basic Need of Shelter

When it comes to the study of millionaires in this country, Dr.…