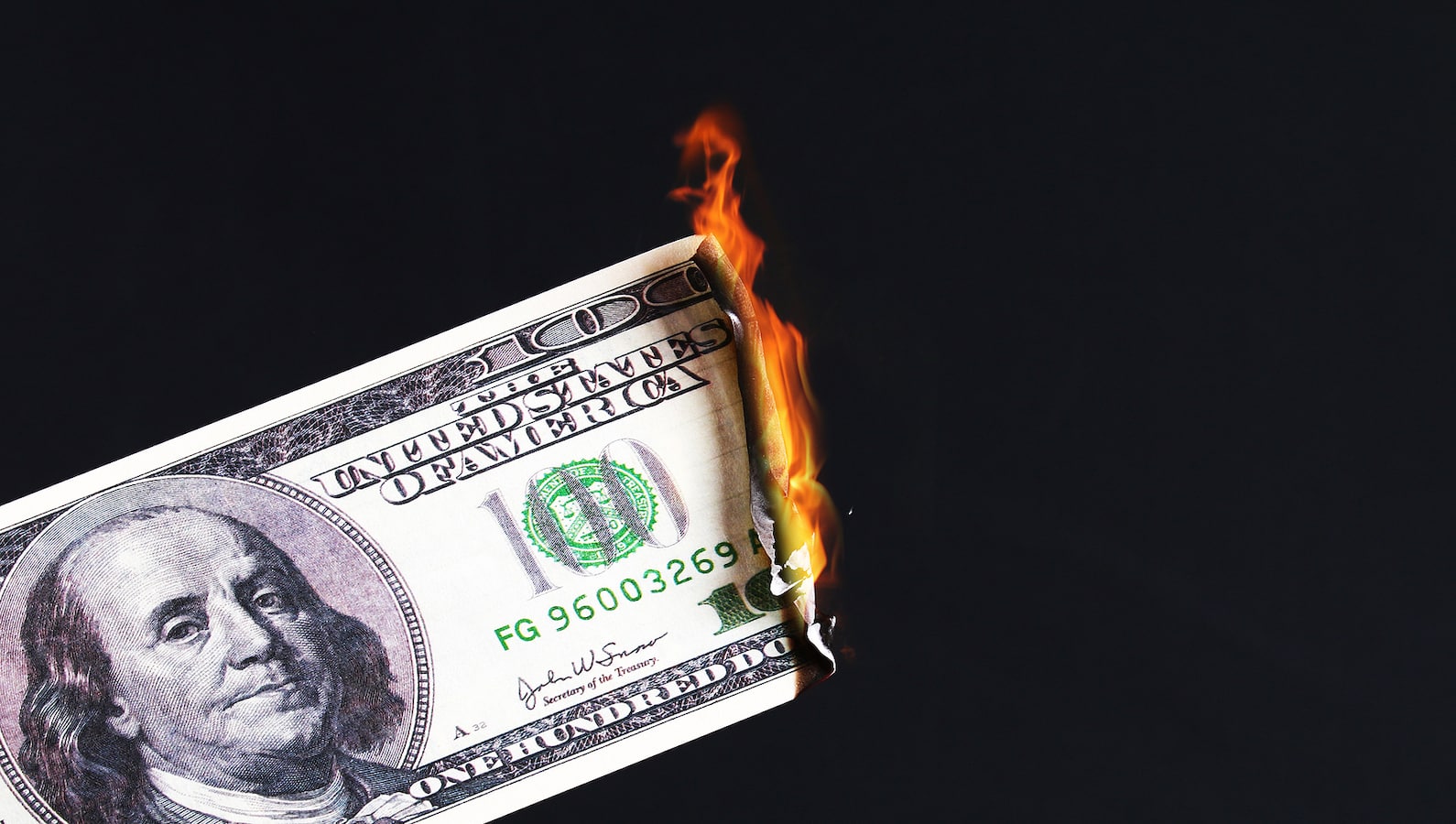 Is there anyone who disagrees that losing money is a terrible thing? And if you’re consistently losing money in your investments that’s a serious problem. It breaks Warren Buffett’s first two rules of investing.

Now that doesn’t mean you should keep your money in a mattress. In fact, if you did, you’d still be losing money to the gnawing effects of inflation.

So what’s an investor to do?

It’s easy to say don’t lose money, but all investments have risk. Fortunately, they don’t have the same risk. Some investments are riskier than others and some are downright notorious for losing money. Let’s look at some of those.

Commodities are economic goods (typically raw materials, basic resources, mining and agricultural products) whose value is uniform regardless of producer. For example, a barrel of oil has the equivalent value whether it’s produced in the United States, Brazil, or Saudi Arabia.

Commodities are highly leveraged products that are traded on the futures market. They can experience wild swings in value over short periods of time, which makes them one of the most volatile asset classes out there.

Commodities are a mystery to the average American. However, success in this asset class demands extensive knowledge. That lack of familiarity coupled with high leverage and excessive volatility is a recipe for disaster. Ultimately, commodities trading is speculative and losing money in this asset class is very easy to do.

While there is no way to completely eliminate risk in commodities, one can lessen the risk a bit by investing in exchange-traded products that package multiple commodities futures contracts together in one investment. That diversification removes some risk, but never forget that most commodities are highly risky no matter how you invest in them.

The stock market is one of the “Big Three” of investments – stocks, bonds, and real estate. And according to a 2021 Gallup survey, 89% of adults in households earning $100,000 or more own stock. Stocks are clearly a mainstream way for investors to grow wealth. With that said, there is a right way and several wrong ways to invest in the stock market.

The biggest risk in the stock market is volatility. Combine that volatility with high liquidity and you have a recipe for costly mistakes. And these mistakes revolve around emotional decisions. As the stock market climbs, investors can experience irrational exuberance that leads them to purchase at market highs.

Conversely, as the market crashes, investors feel the strain of significant losses. Unfortunately, many will solidify those losses and sell at market lows in an attempt to preserve what they have left. There’s a good reason that the stock market mantra is not, “Buy high and sell low.” And yet far too many investors do just that.

The financial services research firm DALBAR does an annual “Quantitative Analysis of Investor Behavior.” Since its inception in 1984, this report has shown time and again that investor returns underperform the index because of their response to the volatility of the stock market. 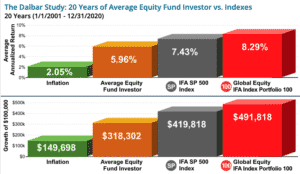 Dalbar’s 2020 study confirms this fact yet again. As you can see from the graph, the annualized returns over a twenty year period for the average stock investor was 5.96%. During that same time, the S&P 500 index returned 7.43% and the Global Equity IFA Index Portfolio 100 returned 8.29%.

Those that are able to avoid being their own worst enemy in the stock market, benefit from taking a long-term investment outlook. They understand that the stock market is volatile and they avoid reacting to short-term fluctuations.

Don’t feel bad, you’re not the only one that’s underperforming the benchmark index. The so-called experts can’t beat it either. These are the people with finance degrees who drive around in fancy cars and wear designer suits. They speak the lingo, follow the graphs, read all of the financial news, and they still underperform the market.

They may seem impressive, but their track record isn’t. As you can see from the graph, the vast majority of fund managers cannot beat the benchmark over the long term. Despite their poor performance, actively managed funds charge more fees than the lower cost index funds. According to their April 26, 2021 article, NerdWallet reports that the average expense ratio for an actively managed fund is 0.82% whereas the average index fund only charges 0.09%. Why should anyone pay more fees to earn less return? They shouldn’t and yet there are millions of investors doing just that.

Instead, wouldn’t it be smarter to invest in index mutual funds? Warren Buffett, the most successful stock market investor on the planet thinks so. In his 2013 letter to his stockholders, he had this advice for the trustees of his estate on what to do with his money once he dies.

“My advice to the trustee could not be more simple. Put 10% of the cash in short-term government bonds and 90% in a very low-cost S&P 500 index fund. I believe the trust’s long-term results from this policy will be superior to those attained by most investors…”

When you understand that people with advanced degrees in finance who manage funds for a living can’t beat the index, why would anyone else think they could? Maybe they’re adrenalin junkies or perhaps index mutual funds just aren’t sexy enough for them.

Despite the research, some people believe they have the recipe for beating the stock market and making money fast. So they employ all kinds of risky investment strategies within the stock market. These are things like individual stock picking, options trading, timing the market, IPO investing, and penny stocks.

That’s not to say that some people don’t make money doing this, but nevertheless, it is very risky.

Now some of you might be asking yourself why bonds would make a list of risky investments. And historically speaking, they wouldn’t. Bonds have a long track record of providing consistent, stable returns and diversification from the stock market.

But have you been paying attention to what is going on in the bond market?

Below is the graph for yields from the 10-year treasury bond. What you’ll notice is that yields have been dropping. And the trend line indicates that this has been going on for decades. So bonds have a long-term trend for being less than lucrative. 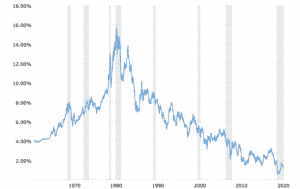 As dreadful as declining yields are, that doesn’t exactly make bond investing risky. That’s true sometimes, but not always. When yields drop below inflation you actually lose money. So in that scenario, bonds would indeed be risky.

And unfortunately, that’s happening now. As you can see from the graph below, the yield from the 10-year treasury bond has minimally beaten inflation (CPI) seven of those ten years. To date over the last two years it has not. The dataset for 2021 is not yet complete, but inflation has accelerated while the 10-year treasury yield has remained low. 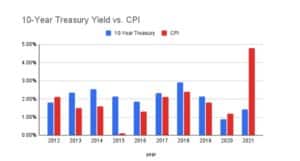 Bond investors are losing money in government bonds. To make up for this unfortunate reality, they’ve had to exit bonds or move to riskier bond products to make up for the shortfall. Corporate bonds are available, but tend to carry more risk, especially high-yield or junk bonds.

Oil and gas are commodities and as we discussed earlier that makes them inherently risky. Crude oil can be purchased on the futures market just like any other commodity. However, there are ETF’s and other ways that investors can buy into this asset class.

One particular way of investing is notorious for losing money. Private partnerships in gas and oil exploration have been fraught with issues.

This type of investment comes with all of the risk associated with oil as a commodity. But it also has the risk of spending millions of dollars only to drill a dry hole in the ground. And since the general public knows very little about this complex investment, it can be a fertile breeding ground for fraud.

In fact the Securities and Exchange Commission has issued an investor alert for private oil and gas offerings. They note common red flags to be on the lookout for are:

Money can be made in the oil and gas industry, but it’s risky. Lots of investors end up losing money. In the best case scenario, you own a depleting asset with highly volatile pricing that is subject to the whims of political agendas.

All investments have risks. And we’ve only scratched the surface on how investors can end up losing money. It’s an important topic because most investors only want to talk about making money.

Despite that, a good case can be made that they’ll end up with more profits in the end if they just focus on not losing money. When it comes to losing money, the mistakes I see most commonly revolve around:

Investment Trends Over The Years

Now that we’ve covered some investments that are notorious for losing money as well as investor behavior that leads to losing money, what are some of the things that work? Keep in mind that I’m not an investment advisor and nothing in this article should be construed as investment advice.

However, I can speak of observations, commonalities, and trends that have taken place over periods of time. Ultimately, you’ll have to decide what works best for you and your unique financial situation.

In the 1980’s and 1990’s both stocks and bonds produced high returns. It was the greatest bull market in U.S. history. In those days, it was common for investors to hold the bulk of their portfolio in index mutual funds with a lesser percentage in bonds (for yield, stability, and diversification).

The 2000’s was a unique decade. Early in the decade, the dot-com bubble burst leading to a recession and the Great Recession decimated the economy at the end of the decade. During that ten year period of time, investments in the S&P 500 saw an annualized return of -0.99%.

It was a lost decade when it comes to the stock market. Bond yields were positive, but not to the degree they returned in the 1980’s and 1990’s. So this was a shock to the system for investors used to making money utilizing a stock/bond approach.

Gone were the days of parking your money and watching it grow. People started looking for alternative investments that could bolster their returns.

“…the reality is that investment portfolios focused on the ‘Big Two Traditionals,’ bonds and equities (stocks), are forcing investors to compromise – either by sacrificing return for lower volatility or enhancing returns at the expense of higher risk. Real estate may offer a way out. This is why we believe real estate is increasingly being viewed, not as an alternative, but as an essential portfolio component.”

Many people continue to invest in index mutual funds as the stock market has bounced back after the Great Recession. However, people still want diversification, inflation protection, tax benefits, and solid returns outside of the market. As bond yields have steadily declined, they have become less of a viable option. Many people have turned to apartment investments to provide those benefits and fill that void.

People hate losing money and they should. All investments have risk, but some are less risky than others. Being disciplined and focused are key factors to investment success. Having a strong understanding of what your investments are is important too.

So if you’d like to learn how to invest in apartments without having to become a landlord, I’d invite you to our website. We have educational videos, articles, and reports that can help you understand how to invest in apartments. And if you’d like to learn more about the 37th Parallel advantage, schedule some time to speak with one of our advisors today.

Four Investments That Protect and Hedge Against Inflation

Are you looking for investments that hedge against inflation? If you’ve been…

Four Of The Best Investments During A Recession

Are you looking for the best investments in a recession? Does that…

How to Profit From Inflation With Multifamily Real Estate Investing

Is it possible to profit from inflation? For most people, inflation means…